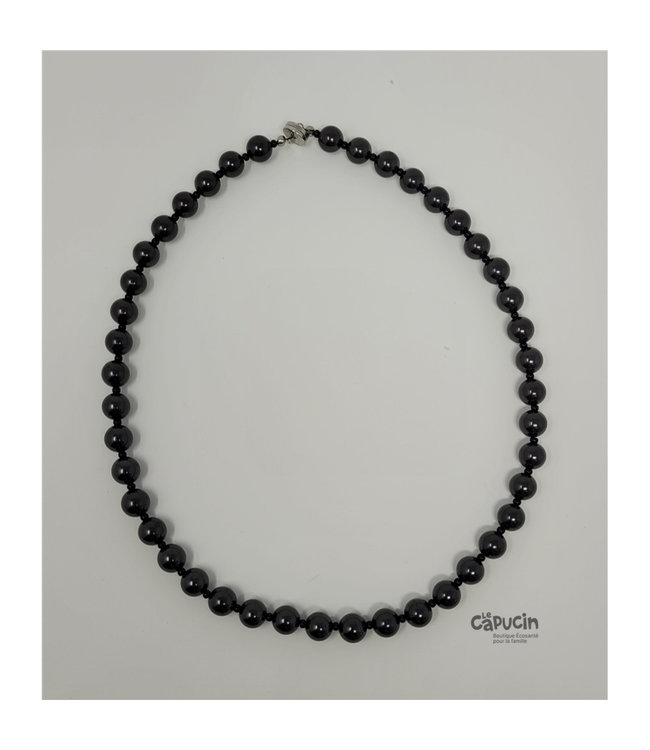 A bracelet that neutralizes the harmful effect and acts as a shield against electromagnetic waves. Read more..

A bracelet that neutralizes the harmful effect and acts as a shield against electromagnetic waves.

The bracelets, worn both on wrists or on ankles, are very effective because the wrists and ankles have many meridian crossing points. They are particularly useful for those who use a computer mouse or are on the telephone for long periods of time. Many massage therapists wear them at the ankles when doing massages.

Many studies now show the danger of electromagnetic radiation (WiFi, cellular, computer, smart electricity meter, etc.). It has been scientifically demonstrated that frequent exposure to these waveforms develop symptoms such as headache, fatigue, weakened immune system, increased risk of cancer.

This protection has the ability to transform the structure of electromagnetic waves so that they become less dangerous to humans.

This comes from a unique type of carbon, the C60, which allows for the adjustment of the harmful radiations. Researches have demonstrated that these tablets are a perfect shield against the harmful electromagnetic fields of the wireless devices.

The discovery of this carbon obtained the Nobel Prize of chemistry in 1996. It is a natural, simple, effective and inexpensive solution for the well-being. Protecting yourself against harmful waves diminishes and prevent stress, fatigue, bad mood and more.

Wear the bracelet on your wrists or ankles. Can be removed for sleeping.

3. The history of Shungite:

Shungite is an exceptional stone, located in Russia in the province of Karelia. It is unique in the mineral world, because of the specificity of its molecular composition, the carbon C60 also known as fullerenes. Fullerenes were discovered in 1985 by Harold Kroto, Robert Curl and Richard Smalley, which earned them the Nobel Prize in Chemistry in 1996.

Shungite is used in Russian hospitals with outstanding results. Outside Russia, this stone was pretty much unknown until 2009, but since 2012 it is receiving more attention and it is now being used in the European therapeutic community.
Researchers and users have shown that Shungite has many particular beneficial properties for all living things. The most important thing is that its balancing properties span upon multiple energy levels. The stone is so powerful that it neutralizes everything that is harmful. It is therefore a perfect shield against geopathology radiation and electromagnetic waves (cellular phones and antennas, computers, high-voltage lines, cordless phones, WiFi, Electric smart meters etc.).

Shungite is not a substitute for medical treatment. When you are ill, consult a doctor.

A bracelet that neutralizes the harmful effect and acts as a shield against electromagnetic waves.